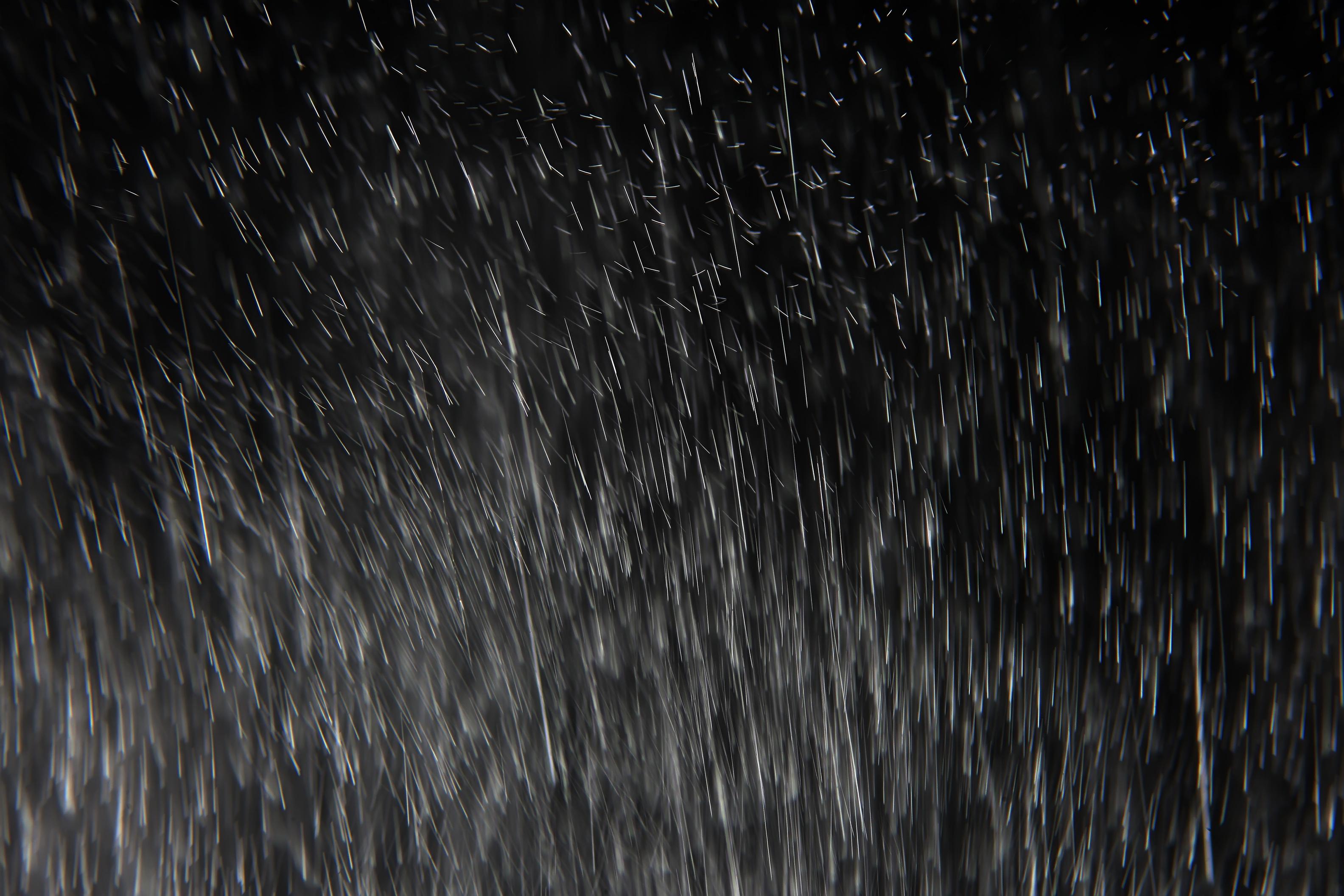 Erosion due to Inseparable Love

We know that wind and rain are fierce lovers and they are inseparable. In our world of tribology their love is toxic, as they affect the performance of machines used in clean energy and transportation systems, that are essential to our society. Wind turbine blades that harness the wind power to produce clean energy cannot escape the wrath of rainfall. During the rainfall, the repetitive impact of liquid droplets on the leading edge of the blades at 100 m/s or beyond can cause leading edge erosion due to liquid-solid interaction. The stakes are even higher for the exteriors of civil airplanes and fighter jets (For Example: French Rafale Jets, procured by India) cruising beyond 250 m/s, as the impact energy of liquid droplets is higher, causing severe erosion compared to wind turbine blades (impact energy is proportional to velocity power 2). Impact of liquid droplet on rigid surface generates water hammer pressure  of several giga pascals and later the droplet depressurizes via lateral jets that can travel at 2 to 6 times the impact velocity. Water hammer pressure and lateral jetting can exert stress beyond the endurance limit of the solid surface, leading to failure mechanisms like pitting, spalling, delamination, fatigue cracks and increased roughness. These failure mechanisms affect the energy production in wind turbines due to increase in the drag and reduced lift. Furthermore, the service life of the blades is affected as the leading edge erosion can be visible within 2 to 3 years of installation. Similar failure mechanisms must be dealt with in the airplanes and fighter jets to reduce the maintenance and servicing cost. For example, repainting of a civilian airplane can cost up to $ 300,000 and the use of 50 gallons of paints. Wind turbine blades and flying machines use epoxy and elastomeric coatings to protect their surfaces against rain. These coatings should perform beyond erosion resistance, as they must be UV and dust resistant, should not affect the designed stress and strain limits of the wind turbine blades and they should not increase the airplane weight. In this regard, the global materials research in wind energy and transportation is focused on development and testing of multilayered coatings by using Ducom Water Droplet Erosion Tester (WDE). In the lab, the Ducom WDE can simulate liquid – solid erosion and failure mechanisms of materials used in wind turbines, airplanes, and fighter jets. Ducom has carefully designed, developed, and manufactured the complicated “Droplet Generator”, that is at the heart of water droplet erosion tester. This droplet generator can precisely control the droplet size between 2 to 5 mm, droplet impact velocity between 25 to 250 m/s and droplet impact frequency between 5 to 50 Hz. 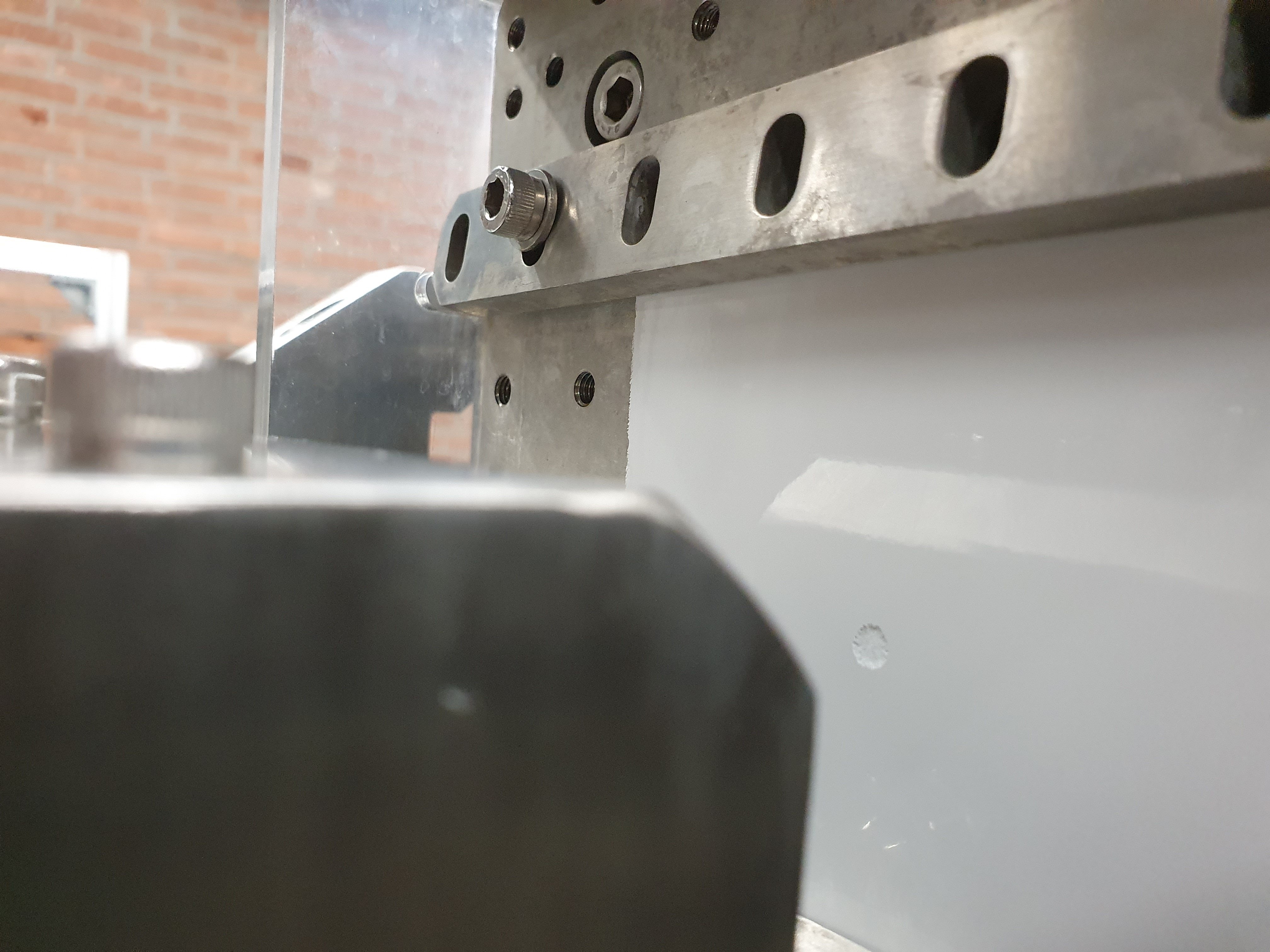 Erosion wear of a elastomer coating due to repeated impact of liquid droplets of 2 mm in diameter.

Note: We are currently working on upgrading the droplet generator to Mach 1 and 2 for simulating wear mechanisms of coatings used in fighter jets. Please contact us (fill in the form at the end of this article), if you are interested in Mach 1 or 2 type droplet generators.

“Ducom Water Droplet Erosion Tester is used by several research facilities in France and Netherlands, to simulate wide range of droplets and the wear mechanisms, and 400 hours of uninterrupted testing”

Steve Jobs said, “Get closer than ever to your customers. So close, in fact, that you tell them what they need before they realize it themselves”. This philosophy is followed at different stages of design and manufacturing of Ducom Water Droplet Erosion Tester. Let me explain this with few examples.

Example A. Research has indicated that residue of water films after droplet impact can create a “cushion” that can resist water hammer pressure. This could affect liquid – solid impact wear mechanisms. To investigate this hypothesis, we have designed a pressure controlled “air blade” system that controls the water film cushioning effect (see Figure 1). 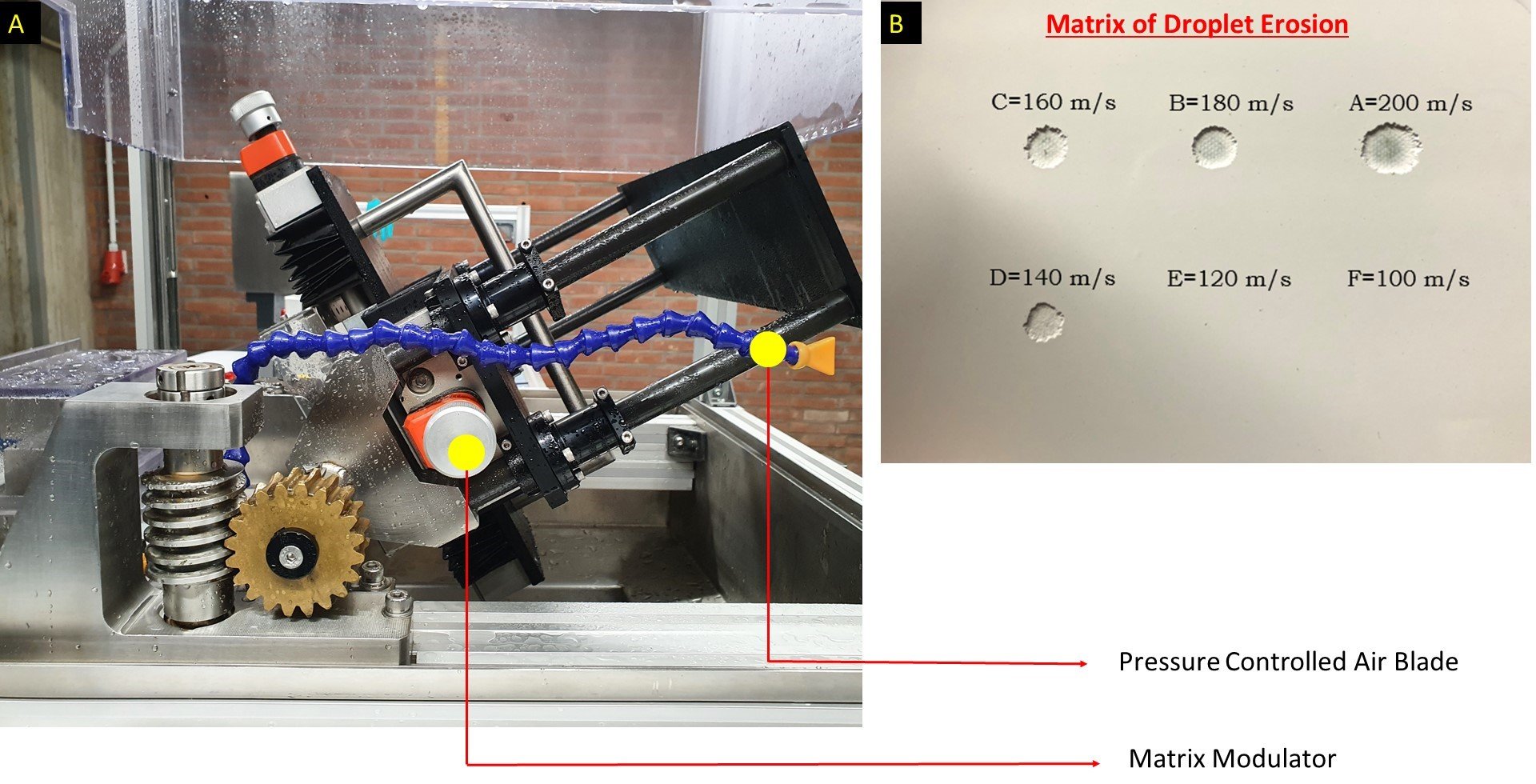 Figure 1. Ducom Water Droplet Erosion Tester (WDE) is equipped with a pressure controlled air blade and matrix modulator (A). Matrix modulator is used to generate a matrix of erosion wear on the same surface (B).

Example B. As shown in Figure 1, the process of erosion over  years of exposure to rainfall can be categorized into five phases- incubation, acceleration, maximum erosion, deceleration, and steady state erosion. In the lab these five phases of erosion can be examined within few hours using the “Matrix Modulator” in Ducom WDE. The matrix modulator is a Y-Z stage that allows the user to accurately position the impact of droplets on the surface, that organizes  erosive wear in rows and columns. 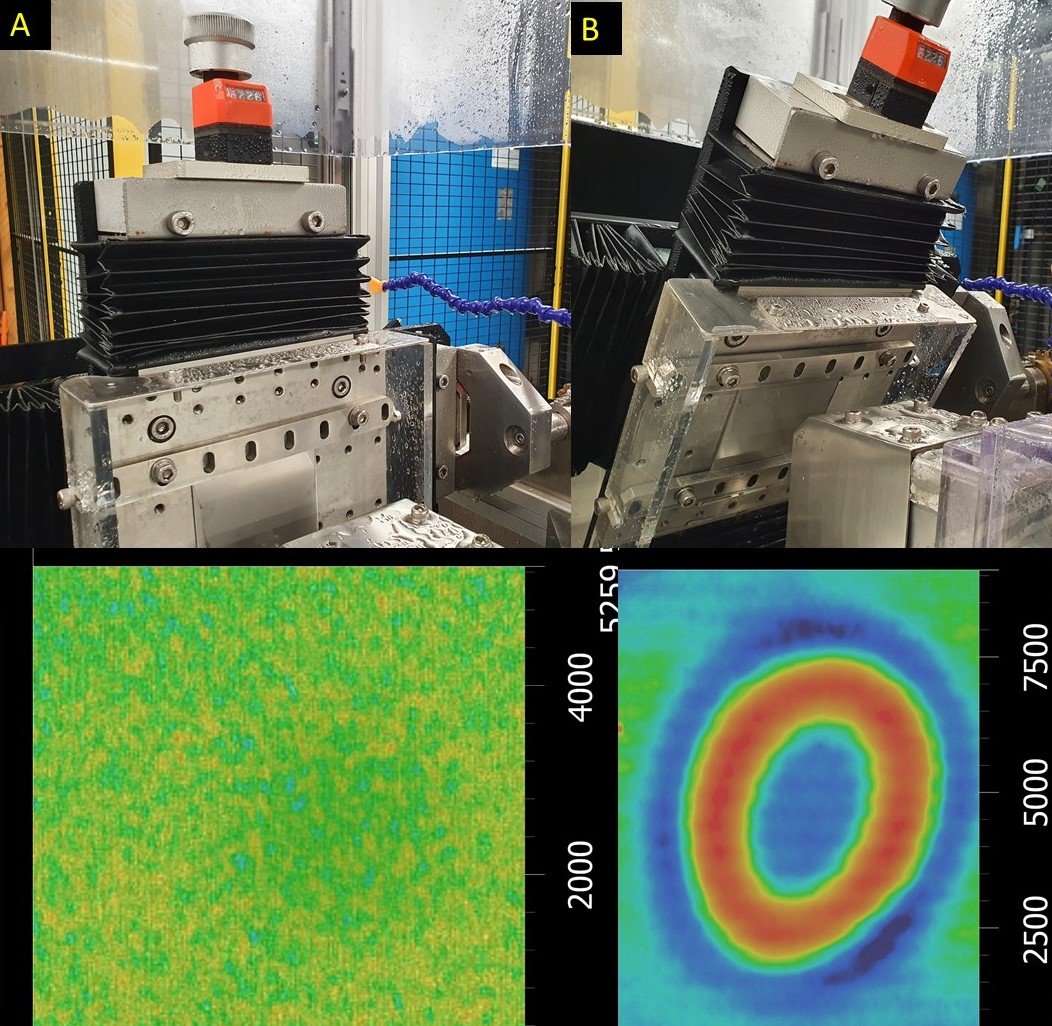 Figure 2. Ducom Water Droplet Erosion Tester with test specimen at 90o (A) and 60o (B) to the liquid droplets shot from the droplet generator. The surface topography image shows no signs of wear on the specimen at 90o, where as there is a severe plastic deformation on the same specimen at 60o.

Example C. An erosion resistant coating is comprised of layers of Anti-corrosion primer, Polyurethane Top Coat and Clear Coat that protects the airplanes against UV, erosion and scratch. As airplanes are flexible in its mobility the impact angle of rain droplet or liquid droplet can vary between 15o to 90o. Ducom LDE is flexible and it can simulate the droplet impact angle in the range of  15o to 90o. As shown in this Figure 2, the angle of impact has an effect on wear, there was a severe plastic deformation of the silicone based clear coat at an attack angle of 60o compared to 90o

Example D. As customer satisfaction becomes a key battle ground for financial success, the product development team is heavily focused on bench marking their coatings  against the competitors. Repeatability and reproducibility are vital for product gap analysis and its bench marking. Ducom WDE is used to repeatedly produce the wear mechanisms, and demonstrate key differences between the coatings. As shown in Figure 3 the sol-gel based clear coat showed no wear compared to silicon based clear coat or PU based clear coat.

Figure 3. Aerospace grade coatings were tested in Ducom WDE, at droplet velocity of 200 m/s and impact angle at 90o. Clear coat with PU tape was delaminated (A), silicone based clear coat was ruptured (B) and sol-gel based clear coat passed the test without any visible wear (C).

We love rain and wind, however when it rains and wind blows, we find ways to hide from them. That's why Bob Marley was scared of love! Wind turbines that harness wind energy should be protected from rain, as wind and rain are inseparable. Ducom Water Droplet Erosion Tester can enable development and validation of erosion resistant coatings, to protect wind turbines and flying machines against wind and rain.

Previous Story
← Reference Materials for Tribology at 1000 deg C.
Next Story
How to Select a Profilometer for Universal Tribometer? →