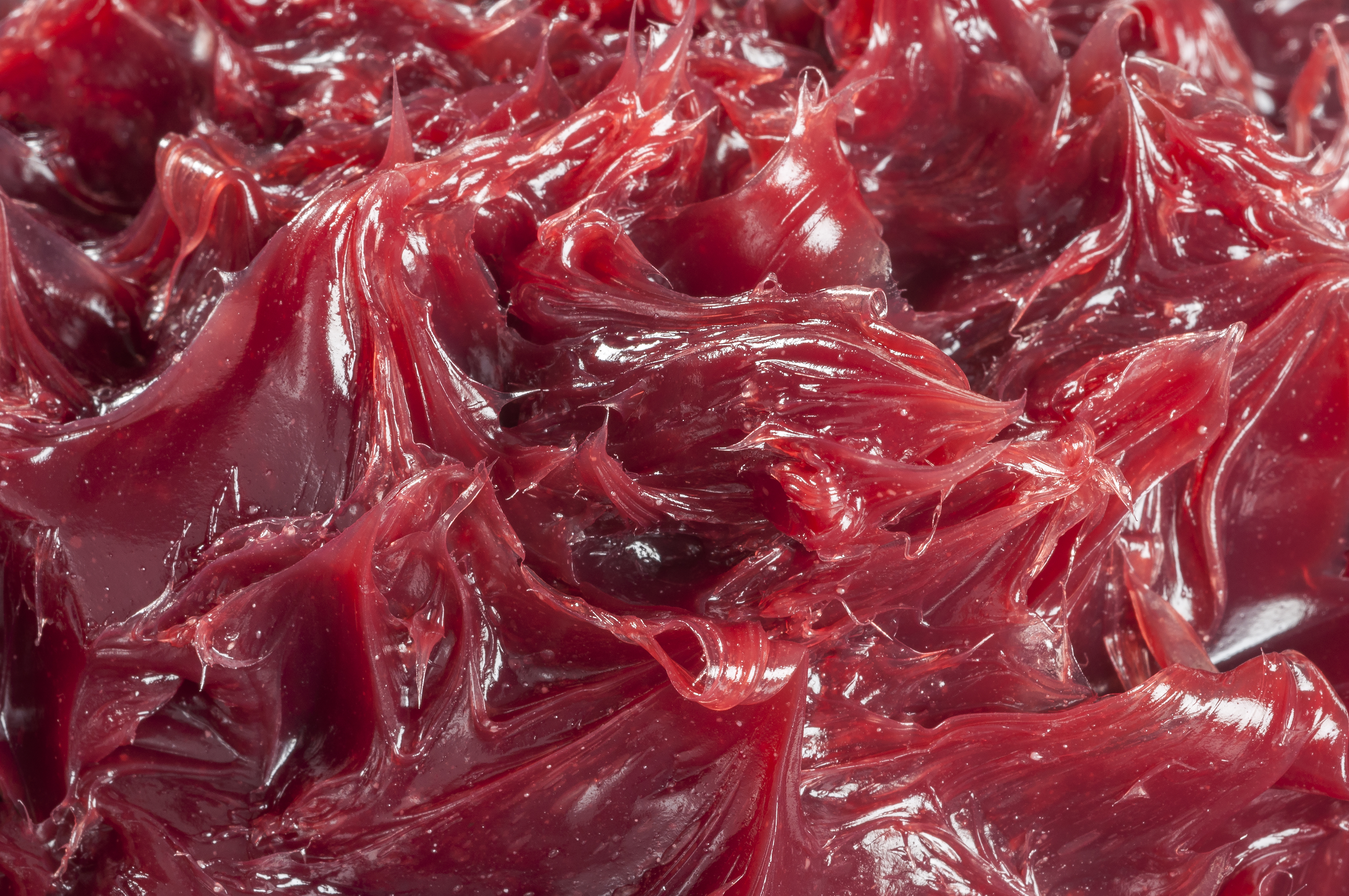 The Effect of Water Molecules on Lubricity of Greases and Fuel

The absorbed water alters the grease properties like the stiffness and film thickness, although it is preferred that grease absorbs water rather than its retention on the surface in order to improve corrosion resistance. It could also modify the tribological behavior of the greases. However, the wear behavior and friction of the greases contaminated with water is yet to be investigated.
In diesel fuel, the solubility of water molecules depends on the hydrophilic nature and humidity of the fuel. When compared to diesel, biodiesel with polar groups is considered to be more hydrophilic and it can hold 2.5 times more water molecules. Such a condition can deteriorate the surface activity of additives in the fuel and also increase the wear due to poor boundary lubrication. It is also possible for the water content in the fuel to be influenced by the temperature, for instance, the water content in fuel decreases with an increase in temperature. Thus, humidity and temperature are two major parameters that are capable of affecting the water contamination of diesel and its lubricity.

This article presents a comparison of the wear preventive and extreme pressure resistance behaviors of two types of commercially available grease. Each type of grease was tested either without or with added water. Additionally, diesel with added biofuel was tested for its friction behavior in a controlled environment chamber (temperature and humidity). Industrial standard techniques like low temperature torque test, four ball test,
and high frequency reciprocating rigs (HFRR) were used in friction measurements. The wear scar was imaged and measured using optical microscopy. On the whole, friction and wear data from the greases and diesel fuel were used to assess the role of water molecules in lubrication.

GREASES. Calcium sulfonate grease of NLGI grade 2 (Optimax CSC2, Optimax USA, Virginia, USA) and Lithium grease of NLGI grade 0 (Optimax 7700, Optimax USA, Virginia, USA) were used in this article. Water was added at 50%, 20% and 10% weight of grease.
Later, the water and grease were manually mixed until the saturation was attained. Greases without water, that is, 0% water was used as a control. Totally, there were four types of lithium-based grease and calcium sulfonate-based grease.

DIESEL. Shell VPower diesel (Shell gas station, Groningen, the Netherlands) was used in this article. Water contamination of the diesel was controlled by increasing the temperature and humidity in the test environment.

The Ducom Four Ball Tester (see Figure 1) and Ducom Low Temperature Torque Tester (see Figure 2) were used to determine the friction coefficient of the greases. Friction coefficient in the four ball tester as well as the low temperature torque tester was measured according to the test method ASTM D2266 and ASTM D1478 , respectively. Also, greases were tested for their load bearing behavior or extreme pressure using the four ball tester and according to the ASTM D2596 test method. 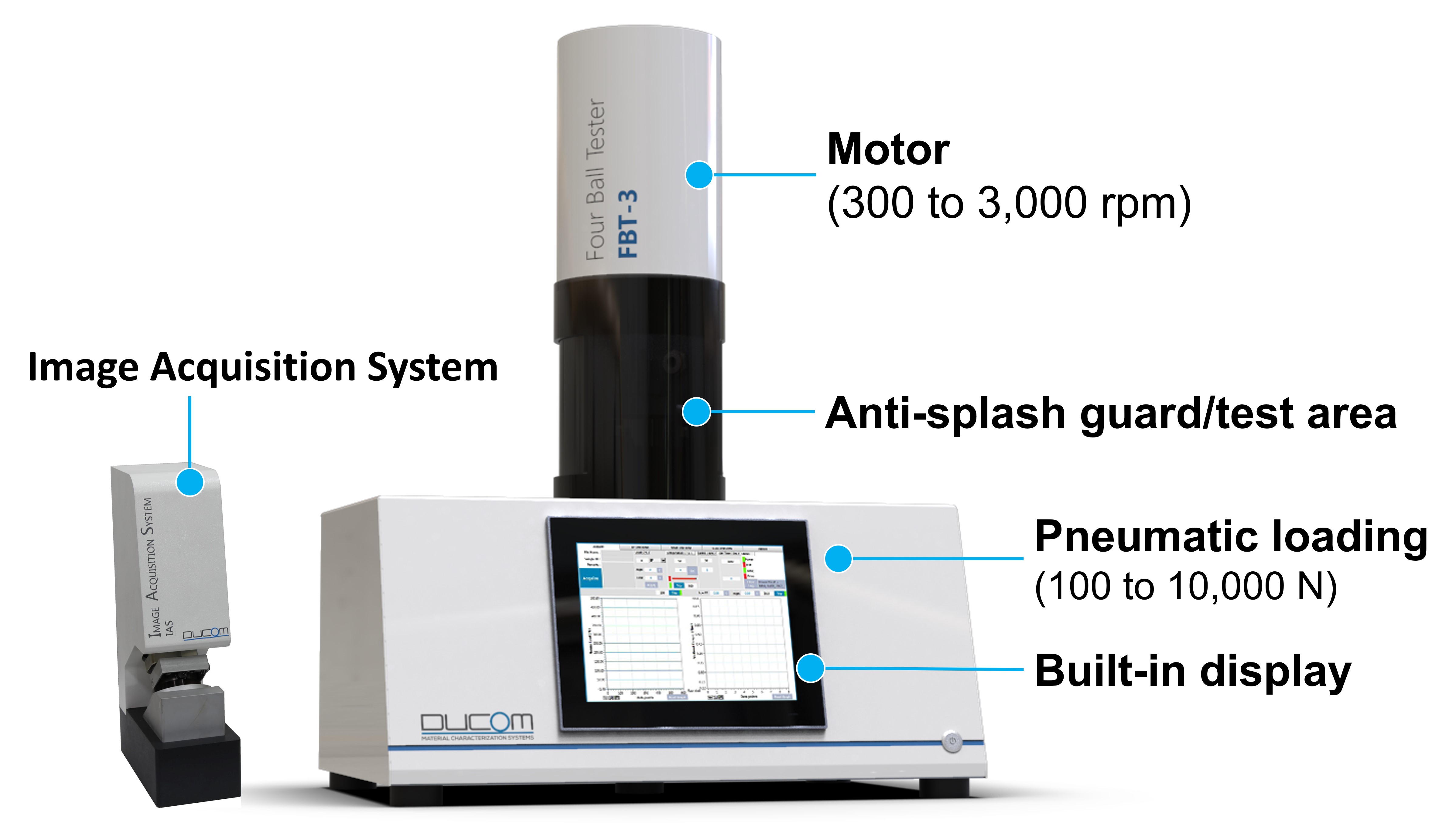 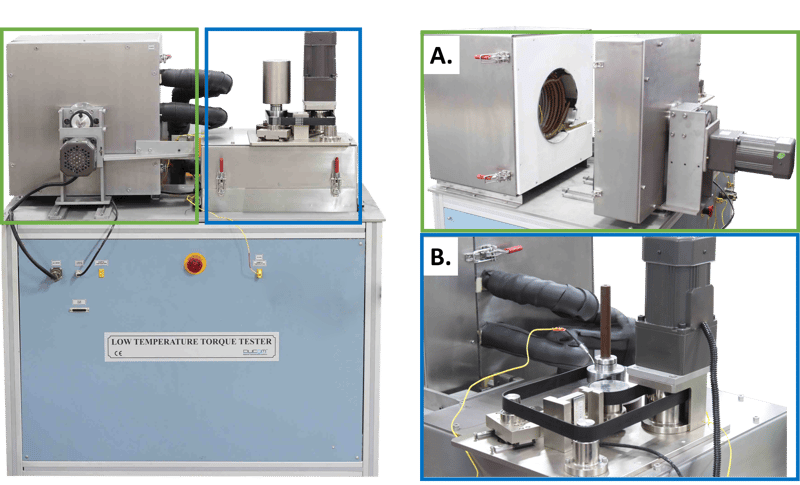 Table 1 presents more description of the testing parameters used in this article.

The four ball test results for calcium sulfonate grease (CaS) and lithium grease (Li) is shown in Figure 4. In absence of added water, the CaS shows lower friction compared to Li (Figure 4A and B). Addition of water disturbs the stable friction profiles, making it more unstable and rough for both the CaS and Li greases. In general, the friction profiles of Li grease with added water (10-50%) is rougher compared to friction profiles of CaS grease. Wear scar diameter for CaS is higher than Li grease before adding water (Figure 4C). Addition of water brings about an increase in the wear, reaching a maximum wear scar of 0.77 + 0.056 and 0.75 + 0.016 at 50% water, for CaS and Li grease, respectively. Load bearing capability of CaS grease is higher than Li grease, according to the intense pressure test (Figure 4D).

Figure 6 represents the friction and wear results for diesel fuel at varied temperatures and relative humidity, as obtained using the HFRR. Figure 6A shows that friction profile is affected by humidity and its profile is rougher at 75% Rh compared to 35% or 50% Rh. Figure 6B shows temperature effect on the friction profiles. As the temperature is increased from 30 °C to 80 °C, friction coefficient increases from 0.28 to 0.37. The friction profile t at 80 °C is rougher compared to 30 °C or 60 °C. The wear scar profiles on the ball (as shown in the Figure 6C) was used to measure the mean wear scar diameter and it was compared with the humidity and temperature (Figure 6D). Wear on the balls increased with an Increase in temperature and humidity. The maximum mean wear scar diameter for Shell Vpower diesel was 335 µm and 310 µm at 60 °C and 50% Rh, respectively. 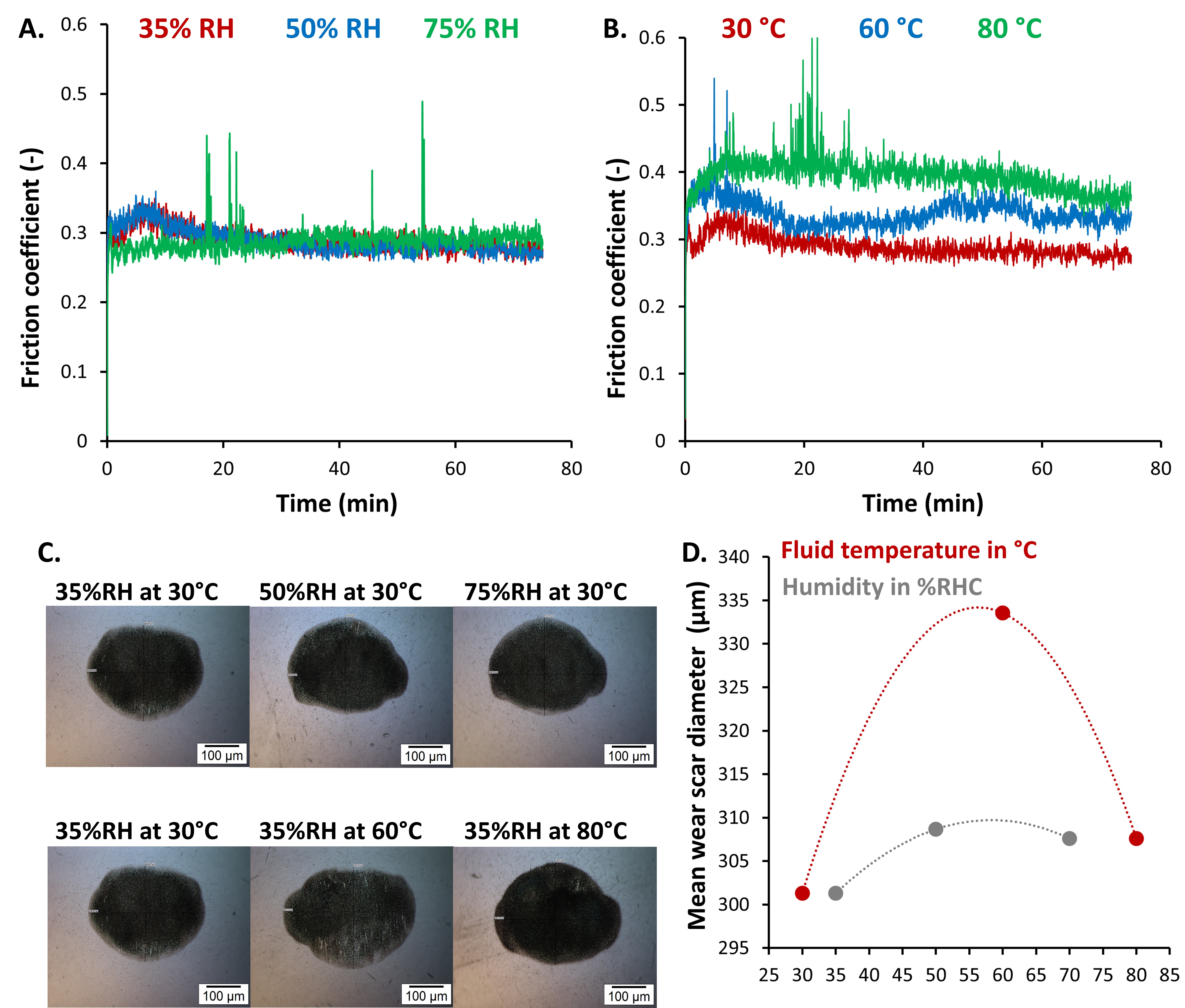 WATER AND GREASE INTERACTION. Addition of water to the grease hinders its lubrication and increases the wear and friction, as determined by the four ball test and low temperature torque test. Calcium sulfonate (CaS) and lithium (Li) thickeners are polar and are considered to be the preferential source of interaction for water molecules. It was established that increasing the water content in CaS grease will decrease its oil bleeding, EHL film softness and thickness , while the opposite effect was observed for Libased grease. Decrease in oil bleeding, for CaS grease, could be the cause for an increase in rougher friction profiles and wear, as shown in this article, which hypothesizes the following mechanismfor water induced changes in the CaS based grease. CaS based grease is developed from CaCos particles (natural boundary lubricant) stabilized by polar calcium sulfonate surfactants suspended in the mineral oil. In order to develop micelle like structures with CaCo at its core, polar calcium sulfonates interact with CaCo through anionic cationic interaction. Water interacts with the CaCo to develop Ca(OH) layer and also interacts with the hydrophilic tail of the sulfonate groups that increases the emulsion stability. Emulsion stability of CaS increases with the water concentration. Additionally, it prevents the surface activity of CaCo and also decrease an effective oil bleeding that results in an increase in metaltometal contact. Poor tribological behavior is thus observed by CaS grease polluted with added water. However, an increase in the oil bleeding by Li grease because of an increase in the water content was not adequate to enhance the tribological behavior of Li grease.

It is also important to note that the load bearing capability that is defined as the load at which the welding take place due to an increase in metaltometal contacts and lubricant starvation was not influenced by water concentration up to 20% for CaS grease. The load bearing test (or extreme pressure test) was performed at a range of 160 N to 800 N (according to ASTM D2596), unlike the friction and wear test of CaS at 40 N (according to ASTM D2266). At high loads, at least four times higher than the load used in friction and wear test, there is enough oil bleeding and surface activity of CaCo that is not impacted by added water.

The grease stiffness generally increases at low temperature, resulting in high run in friction that inflicts damage to the bearings. For CaS grease, increase in the water content brings about an increase in its stiffness, thereby increasing the run in friction. Furthermore, it proves that the increase in added water to CaS will increase its emulsion stability (as explained earlier) that decreases the oil bleeding to hinder the grease lubrication during the low temperature operating condition.

In this article, the friction and wear behavior of lubricants is hindered by added water. The experimental results from a low temperature torque tester, four ball tester and a high frequency reciprocating rig indicates the following,

1. The signature effect of water contamination is that it transforms the stable friction profile into a rougher and unstable friction profile due to an increase in metaltometal contacts, as observed for fuel and greases.
2. Loss of tribological behavior of CaS grease (ASTM D2266) can be linked to the decrease in oil bleeding and poor surface activity of CaCos additives due to an increase in water contamination (10%, 20% and 50%).
3. Load bearing capability (ASTM D2596) of CaS grease is not affected by water contamination up to 20% of its weight. This could be attributed to high operating loads where the oil bleeding is not affected by water contamination of up to 20%.
4. At 30 °C, for CaS grease, the runin friction torque displays a linear increase with the concentration of added water. It proves that the effect of water on poor oil bleeding and tribological behavior is also prevalent at 30°C.
5. For Shell Vpower diesel fuel, an increase in humidity will hinder its lubricity. This is associated with an increase in the interaction between water (due to humidity) and polar groups in the fuel that permits few polar groups to interact with the metal surface and display poor boundary lubrication.
6. For Shell Vpower diesel fuel, an increase in the temperature from 60 °C to 80 °C, increases the wear and reduces the friction. Lower friction can be due to decreased ater content and low wear is attributed to the formation of protective oxide layer, due to Increase in temperature.

Automation in detecting wear scar and its measurements

Join us in enabling key tribological solutions at STLE