Lubrication has been pushed to the extreme limits of loads, speeds and torque transfer in several industrial segments such as mega wind turbines (> 10 MW) and electric vehicles. Increasing power transmission efficiency with lower surface distress requires a combination of advanced lubricants and surface engineering (coatings, texturing). Rolling-sliding contacts found in gears, bearings and manufacturing rolling operations are often evaluated using either ball-on-disc or twin-disc (roller on roller, RoR) configurations where both surface are independently driven to give different slide to roll ratios. 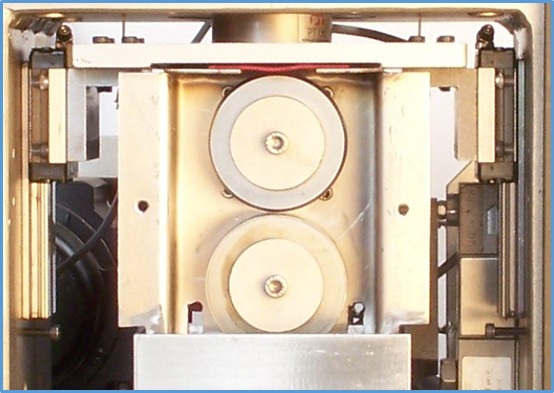 It is important to compare the widely accepted rolling-sliding configurations i.e., twin-disc and traction machine. Roller on roller offers >  3 GPa contact pressures and realistic elliptical contacts using steel-steel pairs as compared to traction machine which can achieve it only by using either tungsten carbide materials or edge loaded barrel geometries. It is accepted as a reliable precursor for FZG scuffing tests. Moreover, rollers offer ease of manufacturing when it comes to evaluating coatings and textures. In addition, Ducom Twin Disc offers multiple contact geometries such as block on ring and conformal contacts compared with traction machine. 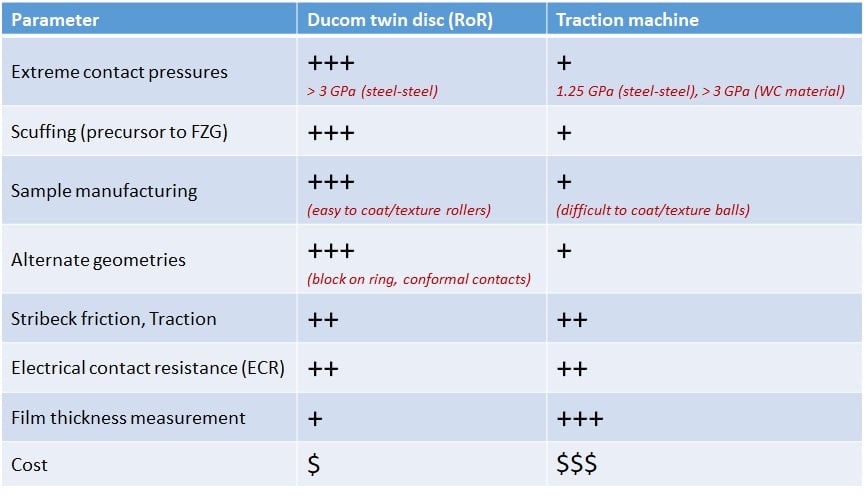 In the absence of standards, engineers have adopted variations of popular test protocols for friction and traction of oils as well as scuffing, that may create confusion. This motivated us to develop and simplify the test methods for evaluation of Stribeck friction, traction curve and scuffing by using Twin Disc. An equally important topic of surface distress (micropitting, white etching cracks) will be addressed in a follow-up article. Common terms used in rolling sliding contacts such as rolling (entrainment) velocity, slide to roll ratio (SRR) and co rotation vs. counter rotation are described in Figure 4.

Stribeck curve represents the friction characteristic of a lubricant over a wide range of speeds, contact pressures and temperatures. A typical test protocol using Twin Disc is shown in Figure 5. Tests are conducted under varying Vroll (entrainment) velocity and lubricant temperature but with a fixed slide-to-roll ratio (%SRR). [Ref 1,2]. 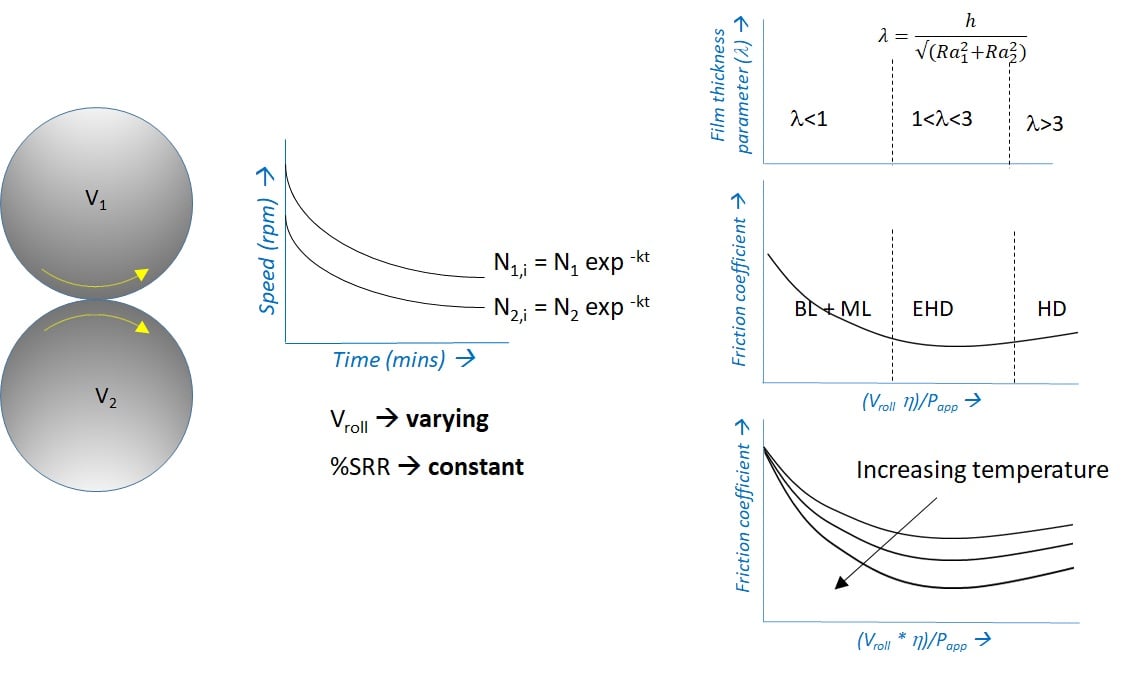 This is an critical design parameter for transmission systems with limiting shear stress representing an upper limit to lubricant stability and thereby torque transfer. The rheological characteristics (piezo-viscous effect) and shear strain dependence dictates the traction response under EHD conditions. A typical test protocol is depicted in Figure 6. A characteristic response is the increase in traction under pressure due to molecular rearrangement in highly loaded contacts.

Scuffing is associated with the failure of fluid film, additives and surface oxides leading to metal-metal contact in highly loaded contacts. Scuffing is difficult to predict and it can occur at any stage in the operational life of components. Hence reliable tests methods for screening of lubricants, additives and surface engineering solutions are crucial. Widely accepted test protocols are shown in Figure 7. Sharp friction spikes indicate scuffing though the loads differ depending on relative direction of rotation of rollers. Under co-rotation, liquid entrainment occurs leading to a higher scuffing load compared to counter-rotation, where a near zero entrainment (starvation) condition leads to lower scuffing loads. This helps to identify the best additive chemistry independent of lubricant viscosity. Such tests are conducted at fixed Vroll, %SRR but increasing loads. (Ref 6, 7, 8, 9]

Another advantage of Twin Disc compared to Traction Machine is its modularity in design. In Twin Disc, the top roller can be replaced with other widely used configurations such as block-on-ring, ball on disc and conformal contacts (see Figure 9) 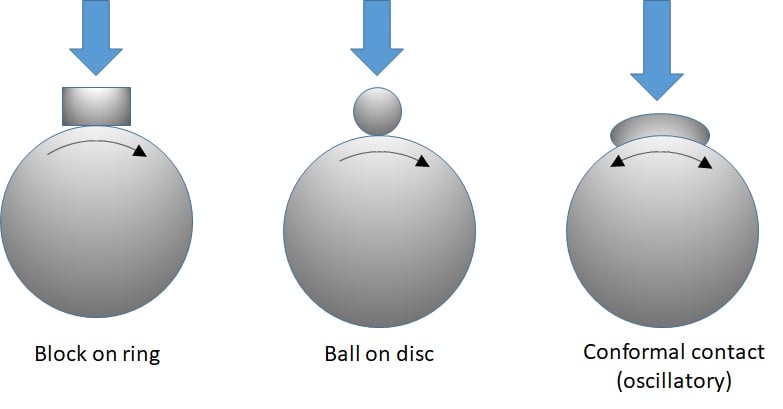 Previous Story
← How to Select a Profilometer for Universal Tribometer?
Next Story
HVOs as renewable diesel fuel →