On the mechanism of lubricant additives using four ball tester

Additives in a lubricant can resist changes in oil viscosity and oxidation, reduce wear and friction, thereby improve the service life of every lubricated system. Synergy between the additive and oil molecules is critical to their role as a lubricant. Synergistic effect should selectively enable activation and adsorption of additives depending on the demands in a lubricated system, for example the adsorption of antifriction additives is triggered by systems demand to stabilize friction, antiwear additives to reduce wear and activation of extreme pressure (EP) additives to resist seizure. Another critical requirement from this synergy is that it can prevent depletion of additives for longevity of lubricants. Achieving this synergy in a fully formulated lubricant is an art. And it is a function of “polarity” that is controlled by the molecular structure, molecular weight, functional group, dielectric constant and surface energy. Although molecular models are used to study the competition between molecular species contributing to protective layers via their chemical and physical adsorption on the surface, these models are too weak in predictions when mechanical shearing is involved (or mechanochemistry). To overcome this limitation in molecular modelling we rely upon the supplementary experimental observations through laboratory scale tests in a tribometer. 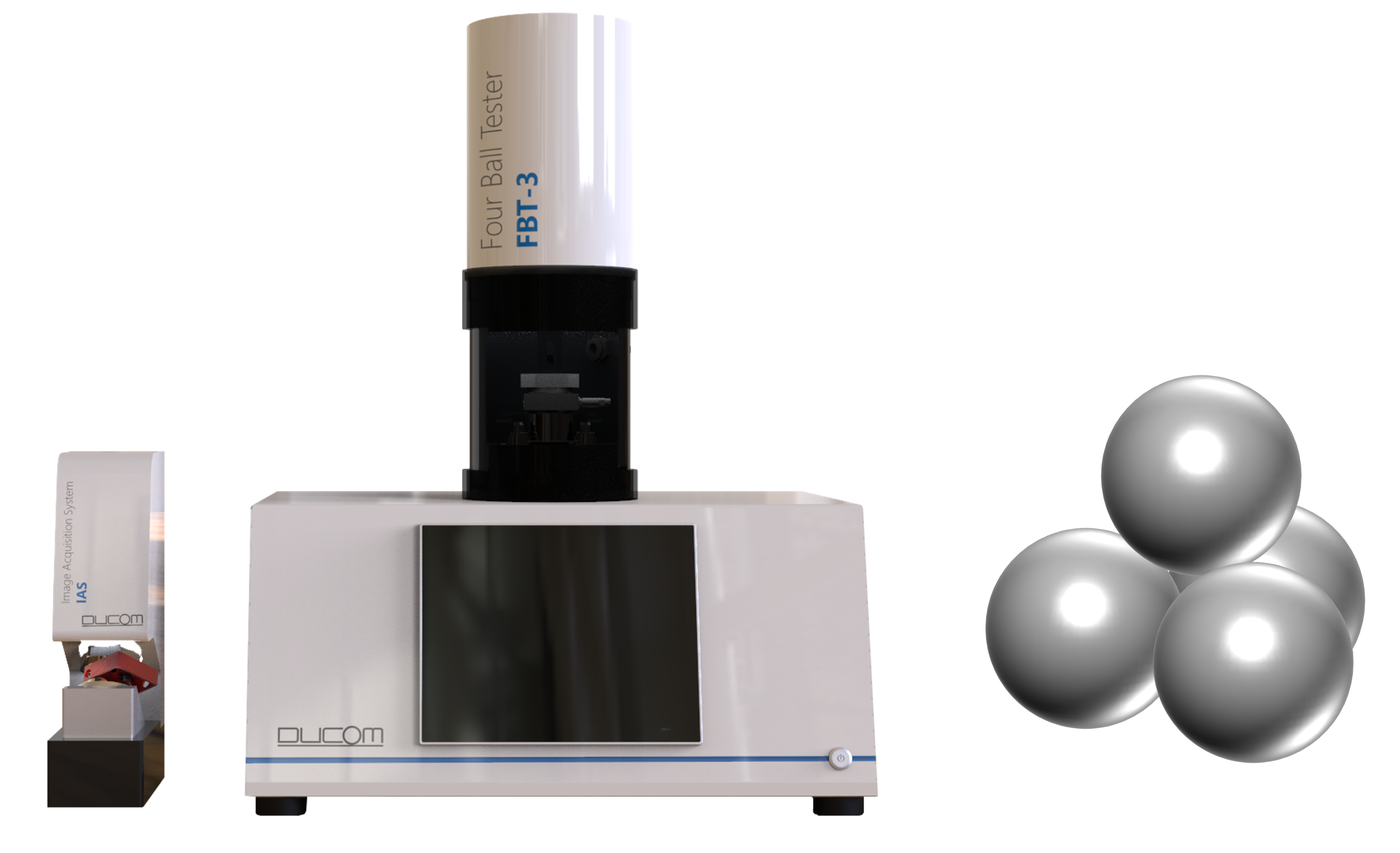 Four ball Tester (FBT-3, contact between a top ball and three bottom balls) is a bench top tribometer that is widely used in a tribology lab to investigate the synergy and competition between molecular species in a lubricant. In this study we have used FBT-3 to test three different lubricants with mineral base oil. Lubricant type A is a mineral base oil without additives, type B has Zinc dialkyldithiophosphates- ZDDP additive (5% to 10%) in mineral base oil, and type C has polysulfide additive (10% to 25%) in mineral base oil. ZDDP is used as an antioxidant, corrosion inhibitor and anti-wear additive in motor and hydraulic oils (also in grease). Polysulfide is used as an extreme pressure additive in metal working fluids for cutting, stamping, extrusion, etc.

ASTM D2783 test method was chosen from the list of test methods in FBT-3. And the operating parameters like load, speed, test duration and temperature were auto set as per D2783 requirements. Each test last for 10 sec. During these 10 secs the FBT-3 software displayed and stored the real time changes in load, speed, temperature, and friction. After each test, the wear scar diameter on the bottom three balls is measured in its nature state using an image acquisition system. Later, the mean wear scar diameter (MWSD) is calculated. The D2783 graph with the MWSD vs. load (Kg) plot is used to determine the incipient seizure load, load wear index and weld load. Incipient seizure load region represents the load range that trigger the breakdown of protective layers formed due to chemical reaction during mechanical shearing and weld load represents the load at which the surface layer failed to protect the system at extreme pressure. Load wear index determines ability of surface protective layer to minimize wear due to applied loads. Load wear index is the average of corrected load i.e. (Hertzian diameter/MWSD) x Applied Load. 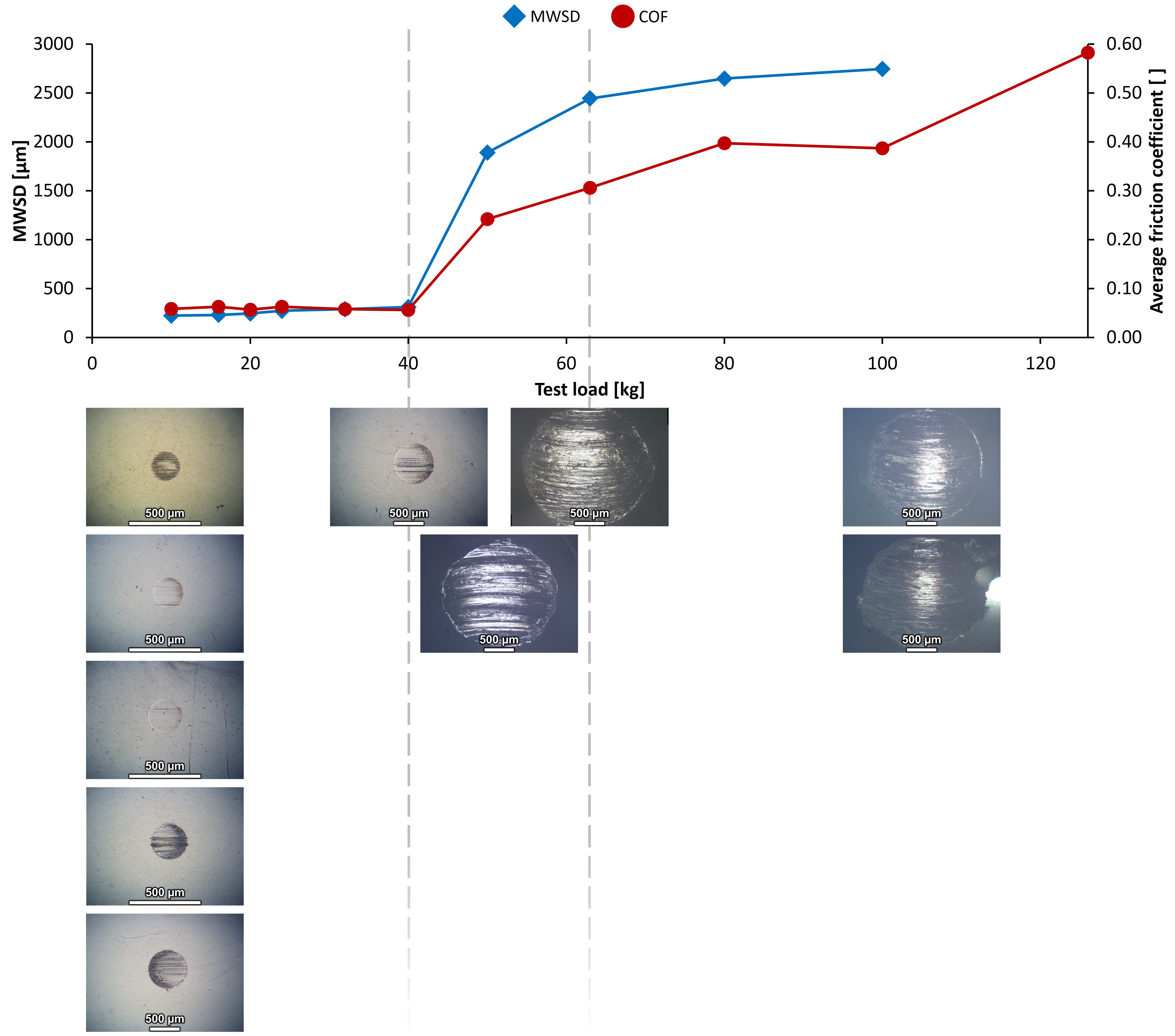 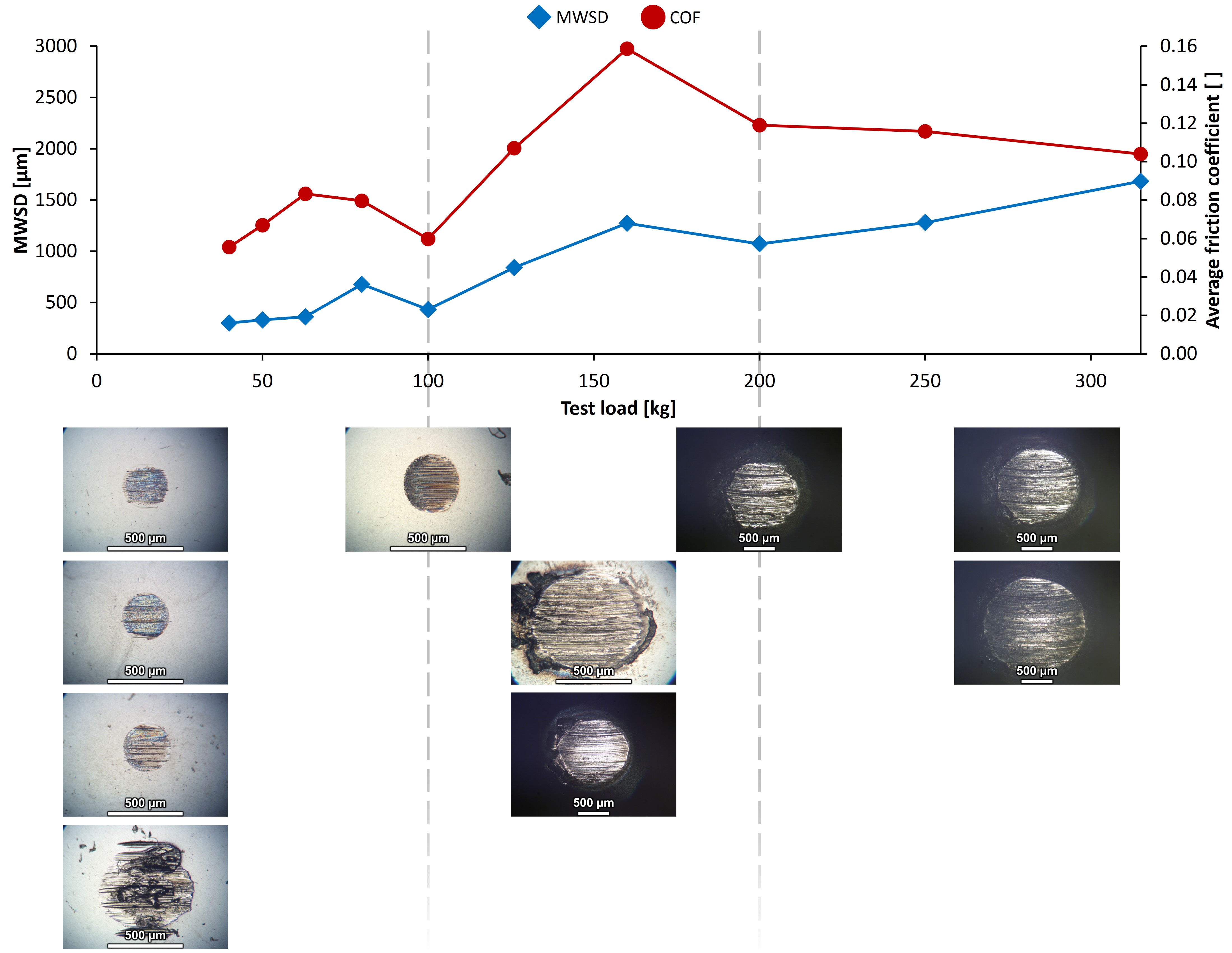 In this FBT-3 study the protective layers formed by the additives had improved the wear resistance and load carrying capacity of base oil. In polysulfide, the activation of sulfur at extreme pressure has chemically reacted with the steel surface to form iron sulfide that can protect the contacts from immediate seizure and welding. In ZDDP, the phosphate-based films (Ex. zinc phosphate and iron phosphate) are formed due to chemical reaction of ZDDP at high pressure. However, these phosphate films fail to resist seizure at extreme pressure. Zinc cations enable higher rate of film formation with respect to rate of wear. Therefore, ZDDP is more suitable as an anti-wear additive. Note: As shown in this FBT-3 friction study, the friction coefficient of ZDDP is higher than polysulfide, it is due to rough and patchy phosphate films as shown by other tribological studies on ZDDP using MTM, AFM and Ball on Disk. 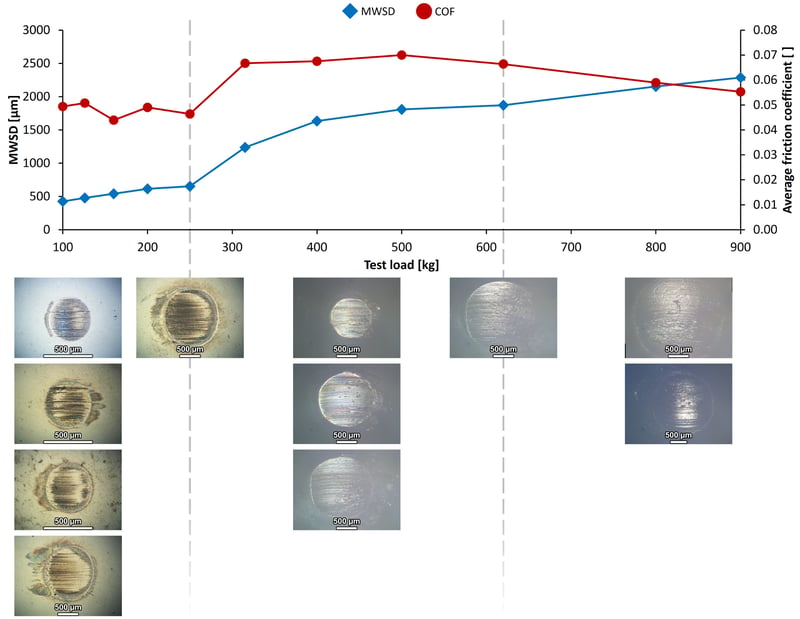 It takes 600 sec to study the performance of protective layers formed due to chemical and physical adsorption during mechanical shearing at extreme pressure. FBT-3 is a quick and economical test method to supplement the theoretical molecular models used to predict synergy and competition between molecular species in a lubricant.

These Stories on Ball Wear

Automation in detecting wear scar and its measurements