Written by Global Applications Team
May, 2021

Stiffness of grease increases when exposed to extreme low operating temperatures. At sub-zero temperatures, the poor flow behavior of the base oil can affect the performance of bearings used in aviation, automotive, defense, agriculture equipment and food storage. How can we test this phenomenon in the lab?

Low temperature torque tribometer are used to determine the resistance of a grease to retard the rotation of a slow speed bearing at sub-zero temperatures by measuring the starting and running torque. Ducom Low Temperature Torque Tester (LTT) is the first and only tribometer in the market that complies with the performance requirements of ASTM D1478, ASTM D4693 and IP 186 on a single platform (see Fig. 1). Two separate chambers on the same platform are controlled by an electronic chiller. 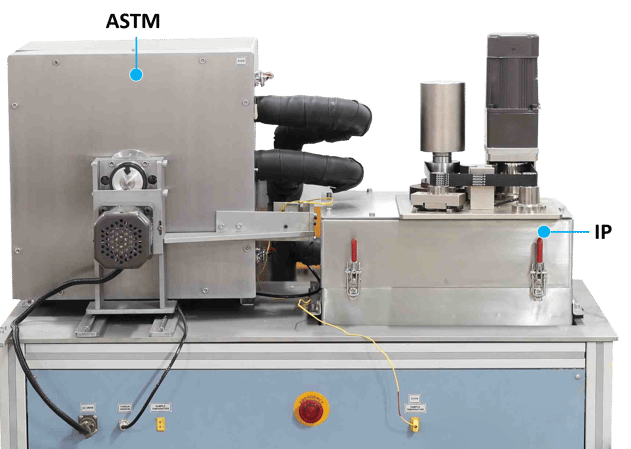 Ducom team has carefully designed the LTT to comply with ASTM and IP test standards. Furthermore, the Ducom LTT is embedded with capabilities that goes beyond the test standards, as described below. 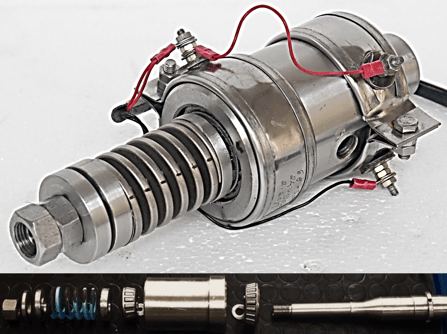 FRICTION TORQUE. The technology used to measure the friction torque described in the test standards is antiquate. According to the IP 186, the starting and running torque must be measured using a spring balance of 10 kg (accuracy of 100 g) and another one of 1 kg (accuracy of 10 g). In the ASTM D1478 and ASTM D4693, the friction torque must be measured using a calibrated dynamometer and a recording potentiometer, respectively. All these measurements are not accurate and require a constant intervention of the user, thus increasing the inaccuracy of the measurements. Ducom LTT uses a strain gauge type load cell of accuracy class 0.5% for friction torque measurements in both chambers (see Fig. 5). The system is fully computer controlled and the user intervention is required only for the test setup.

Figure 5. Load cells used to measure starting and running torque in (A) ASTM and (B) IP chambers.

In the ASTM chamber, the friction torque sensor (load cell) is directly connected to the outer race of the test bearing using a thin chord (see Fig. 5A). Once the motor starts rotating the bearing inner race at 1 rpm, the resistance to rotation exercised by the outer race is recorded. using this force measured by the load cell and the length of the chord, the starting and running torque is calculated.

Figure 6. Pulley system and seamless belt in Ducom LTT according to IP 186.

In the IP chamber, the friction torque sensor (S type load cell) is directly connected to one of the pulleys, called friction pulley (see Fig. 6). The test bearing is located in the driven pulley. Once the motor starts rotating the  driver pulley at 1 rpm, all the other pulleys starts rotating driven by the seamless belt. In particular, the driven pulley starts rotating the inner race of the bearing, and the resistance caused by the outer race of the test bearing is detected by the load cell. Using this force measured by the load cell and the pulley diameter, the starting and running torque is calculated.

SPINDLE ROTATION. The design of the motor used in both ASTM and IP chambers  complies with the requirements mentioned in the test standards: motor drive shaft assembly positioned horizontally for ASTM (see Fig. 7A), and pulley arrangements by seamless belt with motor positioned vertically  for IP (see Fig. 7B). In both cases, the motor rotates the spindle connected to the test bearing at 1 rpm or beyond 100 rpm.

Figure 7. Motor drive shaft assembly in ASTM chamber (A) and pulley arrangements by seamless belt  in IP chamber (B).

LOAD. Manual loading using dead weights for both ASTM and IP chambers. In the ASTM chamber, the normal load is applied radially by adding a disk of 454 g to the bearing cage (see Fig. 8 left). In the IP chamber, a dead weight of 4.5 kg is applied directly on the spindle connected to the test bearing (see Fig. 8 right).

TEMPERATURE. The test standards are quite generic on the technology to be used to reach sub-zero temperatures. The ASTM D1478 mentions to use "any well-insulated box of at least 0.03 m3 interior volume",  while the IP 186 mentions to use a cooling bath. Ducom LTT uses an electronic chiller with a dual stage cascade refrigeration system to maintain the sub-zero temperature in both test units (see Fig. 9).

The refrigerant is pumped and circulated at low temperature via copper tubing coil in a closed loop temperature control system. The maximum low temperature is -80 °C. Thermocouples are directly in contact with the test bearings and the temperature can be controlled and maintained within + 0.5 °C.

Table 1 describes the test parameters according to the ASTM and IP test standards, and their comparison with Ducom Low Temperature Torque Tester.

In general, after a high run in friction, the friction torque of all three greases decreases and stabilizes until the end of the test (see Fig. 10A). The run in friction increases linearly with the added water content (see Fig. 10B). Addition of water to the grease affects its lubrication and increases friction, as determined by the LTT test. We hypothesized that this is due to the decrease in bleeding of base oil in the grease contaminated with water. Read the full article here.

This innovative modular design with easily accessible test area enabled with safety in achieving stable ultra low temperature makes Ducom Low Temperature Torque Tester appealing to grease R&D labs. LTT is fully compliant with global standards for low temperature grease testing and has capabilities that goes even beyond the test standards. With test protocols embedded in the software, you can run tests in accordance with ASTM and IP at the click of a button.

Previous Story
← How is PoD 4.0 a workhorse of tribology lab ?
Next Story
Automation in detecting wear scar and its measurements →