Diesel is a distillate of crude oil and is extensively used by transportation sector. According to U.S. Energy Information Administration, the global diesel fuel consumption in transportation segment is projected to increase by 48% from 2012 to 2040. As a result, diesel will be a major factor to the mobility efficiency in the years to come.

Diesel provides two crucial functions for an automotive vehicle. It serves as a fuel, a source of chemical energy that is converted into mechanical energy within an internal combustion engine. It also acts as a lubricant and protects the critical moving parts, for instance, the gear box used in a diesel fuel pump (see Figure 1). However, seasonality could influence the behavior of the diesel as a lubricant and engine fuel. 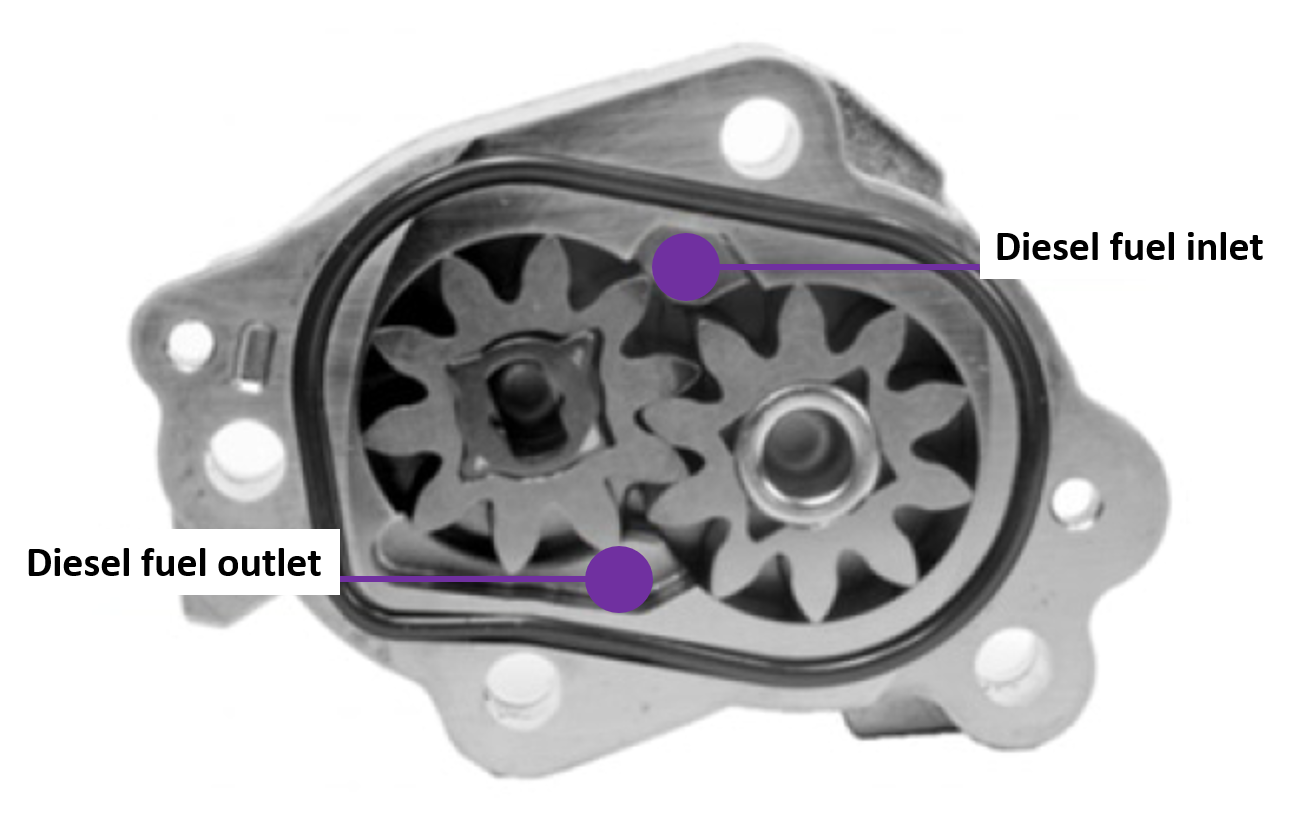 Flow Properties of Diesel Fuel. The flow properties of the diesel fuel govern the safety of an internal combustion engine. During the winter season, the low temperature environment causes the paraffin in the diesel fuel to crystallize, which clogs the filter and blocks the diesel flow. This is represented by cold filter plugging point (CFPP) of diesel fuel. Fuel suppliers treat the diesel (fuel blends and additives) to adhere to CFPP standard (EN 590) that assures diesel flow based on the season – summer, first transition period, winter and second transition period (refer to Table 1). Season dependent modification of the additives in diesel fuel could influence the diesel lubricity. However, this is yet to be investigated.

Table 1. Cold Filter Plugging Point (CFPP) specifications for diesel fuel during different seasons in Netherlands. The section “code” is specific to this study.

At Ducom Instruments, the testing laboratory began to monitor the lubricity behavior of diesel procured from a nearby gas station in the city of Groningen – Netherlands (Figure 2). The diesel fuel samples were taken from May 2016 till March 2017. It includes all the seasons described by EN 590 standard as given in Table 1.

Figure 2. Gas station in Groningen (A) and collection of diesel fuel using a safety container (B).

For the tests we used the Ducom High Frequency Reciprocating Rig (HFRR 4.2). As shown in the Figure 3, it is a ball on disc tribometer, widely used to investigate the lubricity of Diesel fuel, following the standard ISO 12156 (refer to Table 2). Friction coefficient and mean wear scar diameter of the ball are the two HFRR parameters used to compare the diesel samples in this study.

Figure 3. Image of Ducom High Frequency Reciprocating Rig (HFRR 4.2), including the description of the operating parameters.

Friction Profiles of Diesel. Friction profiles of diesel changed with the season, as shown in Figure 4. Friction coefficient of summer diesel (average of four samples from May 2016 till September 2016) was found to be higher than the diesel during the first transition period (October 2016). Overall, friction coefficient of the winter diesel (November 2016 till February 2017) was the highest.

The viscosity of diesel during the winter (W) and transition periods (T1, T2) should be lower compared to the summer diesel (S). Lower viscosity fuels are easy to shear which results in lower friction. This explains the friction behavior of diesel fuel from the first transition period. Any additional decrease in the viscosity, as anticipated for the winter diesel, increases the contact between the rubbing surfaces. A mechanism referred to as boundary lubrication, that  could be the reason for high friction by winter diesel (W). 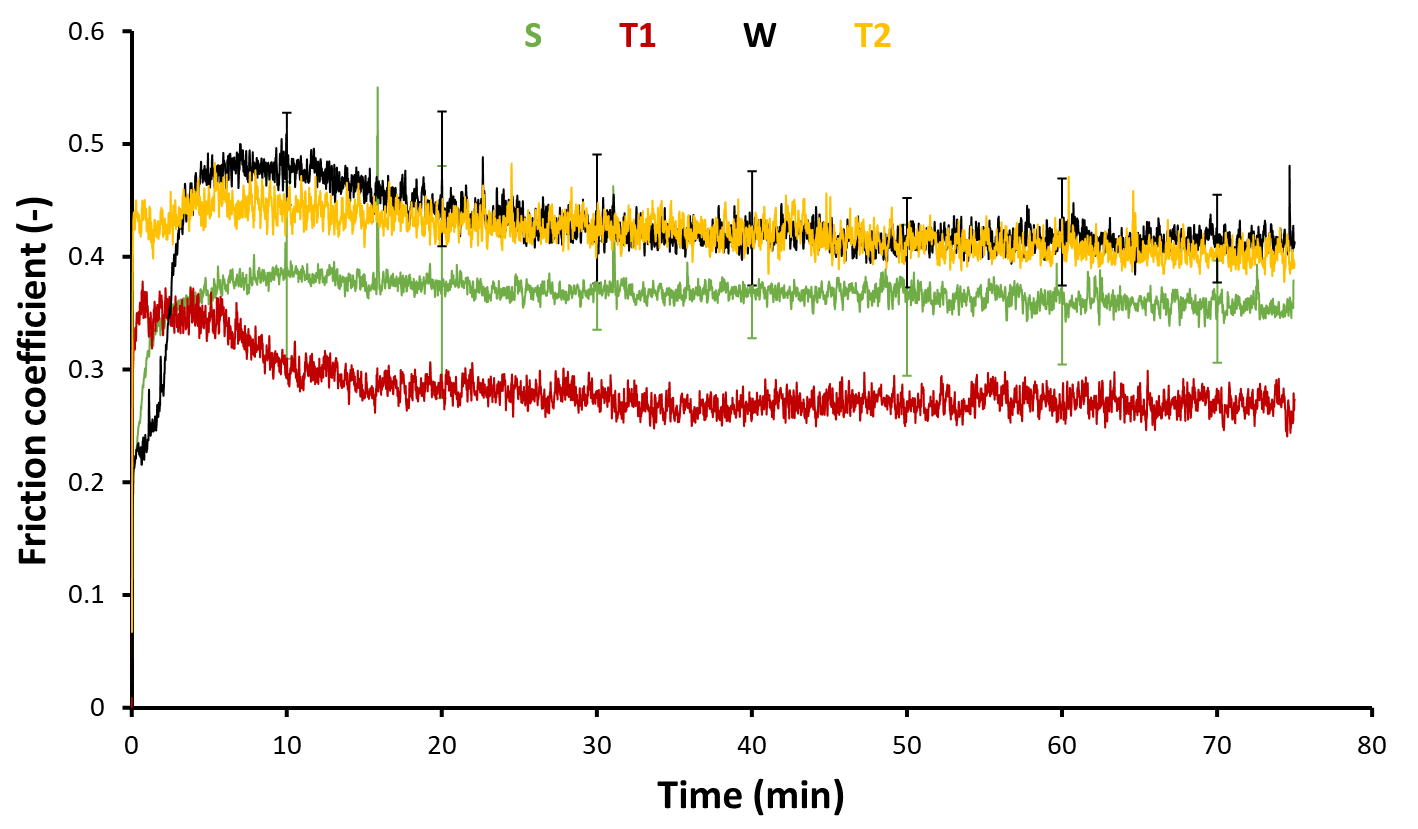 As shown in Figure 5, wear scar of the balls after the HFRR test is  different based on the season. In Figure 6, the mean wear scar diameter (MWSD) on these balls were measured and plotted as a function of the season.

Conclusion. Ducom HFRR lubricity data (May 2016 to February 2017) indicate that the diesel in October (first transition period) has an ideal combination of antiwear additives and low viscosity. During the winter season, the friction was higher but the MWSD was comparable to the summer diesel indicating that antiwear additives in diesel fuel are adequate to offset the low viscosity of winter diesel fuel. All the MWSD reported in this research is within the highest MWSD (460 µm) limit for diesel fuel supplied in Netherlands (source: Infineum International Limited “Worldwide Diesel Fuel Quality Survey 2014”). This HFRR study performed by Ducom proves that the diesel fuel’s lubricity can be seasonal. However, at any given season the diesel lubricity data conforms to EN 590.