India is committed to reduce greenhouse gas emissions by 35% till 2030 by ramping up capacity in wind, solar as well as clean coal technologies to meet COP21 goals. Advanced Ultra Super Critical Power Plants (AUSC) is a key technology that offers efficiency of 47 to 50%, almost 35% higher than the existing fleet of conventional power plants. This directly translates to a CO2 emission reduction of 2 giga tons. Other technologies being developed by the country include co-firing biomass derived fuels in existing power plants and waste-to-energy generators so as to reuse both agricultural  and municipal waste to promote a circular economy.

To achieve 50% efficiency, AUSC plants have to be operated at a steam pressure of 30 bar and temperature of 700 deg C. Advanced nickel-based alloys and coatings would be required to withstand the hot-and-harsh environment of the boilers, in particular high temperature erosion-corrosion and ensure safety if boiler explosions and human casualties are to be prevented (Ref - June 2020, 3000 MW Neyveli Power Plant explosion, India).

What are these failure mechanisms which affect safety and efficiency of AUSC plant?

Fireside erosion-corrosion of boilers components is a major issue which leads to metal loss of heat exchanger due to both mechanical and chemical interactions of the metal surface in the flyash flue gas environment. A useful way of visualizing these interactions is through erosion-corrosion and metal wastage maps, which have previously been developed for erosion-oxidation (Figure 1a) and (Figure 1b). Such maps do not exist for the boiler environment. 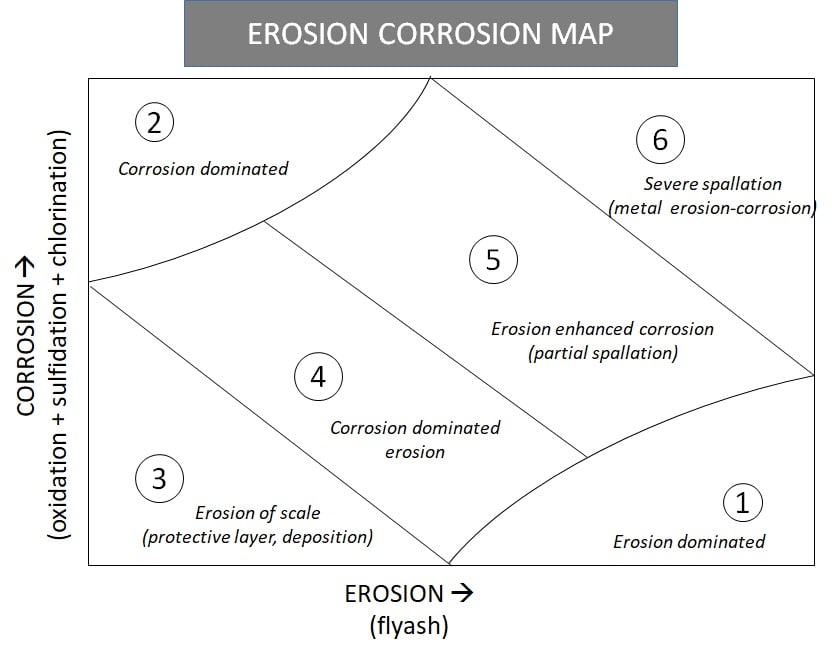 Figure 1a. High temperature erosion-corrosion map indicating the erosion dominated, corrosion dominated and mixed regions. The difference between this and established erosion-oxidation maps is that corrosion comprises of oxidation, sulfidation and chloridation while erosion can be a combination of material deposition and removal 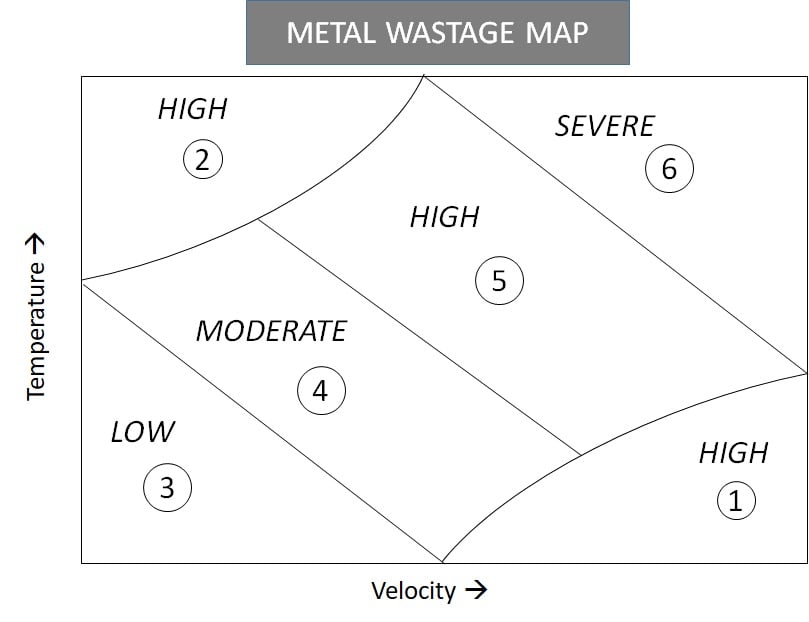 Different domains can be demarcated corresponding with the degradation mechanisms and metal wastage rates.

Region 1 (erosion dominated) - the high quartz content of Indian coals, a hard material, leads to high erosion rates of the burners and boiler components with increasing velocity either during firing or soot blowing. Repeated impacts eventually result in excessive thinning of water wall and potential rupture.

Region 2 (corrosion dominated) - fly ash with alkali salts (sulphates and chlorides of potassium and sodium) form eutectics that are molten at 700 deg C and get deposited on the tubes. These can then react with the protective oxide layers (Cr2O3, Al2O3 and NiO) in the presence of flue gas (containing corrosive SO2) to make them porous and enhance corrosion. The rate depends exponentially on temperature

Regions 3-6 (erosion-corrosion interactions) are perhaps the most important in the context of AUSC boilers as the synergy could accelerate the rate of metal wastage by orders of magnitude compared with ‘pure’ mechanisms. This is also the least understood mechanism due to the complexity associated with a constantly evolving surface chemistry, phases, thickness, erosion, spallation and deposition. (Figure 2) 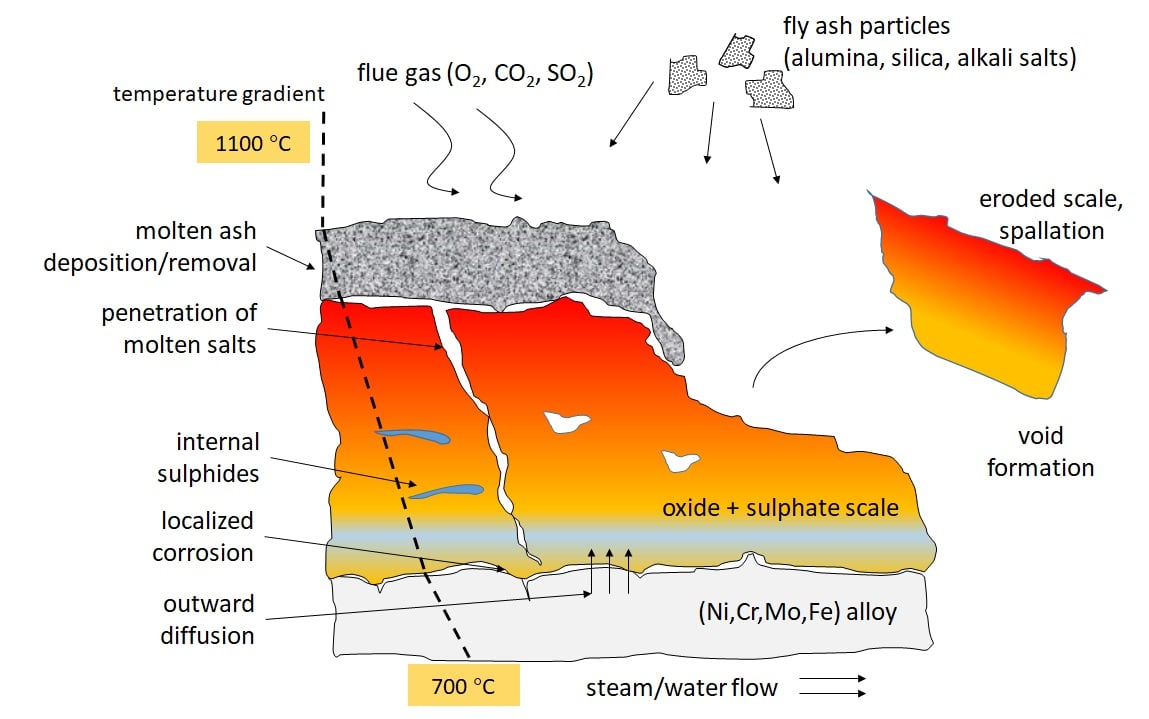 Figure 2. Erosion-corrosion-deposition interactions between the fly ash, flue gas environment with the oxide scale leading to metal wastage. The temperature gradient across the surface layer is shown.

On one extreme (region 6) these could spall of and expose the underlying substrate to accelerated erosive-corrosive degradation. On the other hand (region 3), the deposits can adhere to the tube, build over time and create an insulating thermal barrier. When this happens, heat transfer to water is significantly reduced, efficiency decreases requiring a soot blowing maintenance step. The other regions 4 and 5 represent a competition between the rate of material removal due to erosion and hot corrosion vs. rate of material growth due to protective oxidation.

How does one evaluate the erosion-corrosion performance and material durability ?

Research by the scientific community has focused either on hot corrosion (in a simulated flue gas environment with fly ash) or high temperature erosion in air. None of these capture the underlying erosion-corrosion interactions (Figure 2) and associated high metal wastage rates (Figure 1b) in regions 3 to 6.

An advanced lab facility that can simulate the boiler environment will bridge the gap between simple lab tests that are being currently conducted and final pilot plant test loop. This will enable accurate validation of material technologies for AUSC (Figure 3). 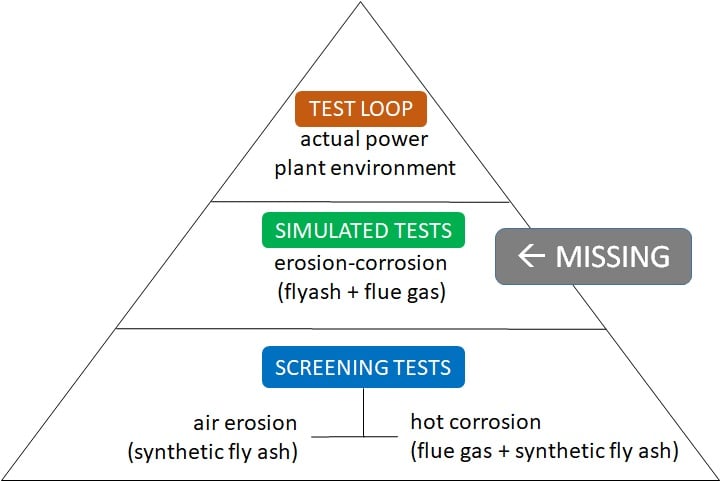 Figure 3. Test pyramid showing the transition from lab tests to field tests and missing link of a high temperature erosion-corrosion facility to reliably capture the interactions and metal wastage rates. 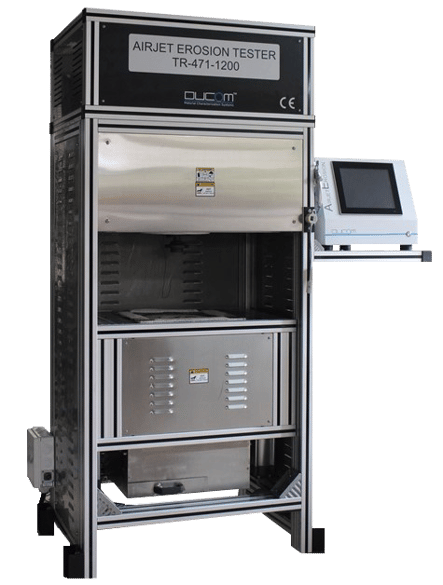 Such a facility will be a powerful platform for evaluating material degradation due to high temperature erosion corrosion not only for AUSC mission but other industries such as waste to energy plants, gas turbines, oil and gas drilling and refineries where similar problems exist.